Browse: Home > Blog > 3 Questions That You Should Ask on the First Day of a New Job 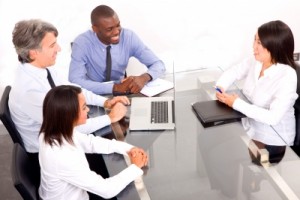 The first day of a new job is often exciting and stressful. You may be worried about fitting in and not making waves, but no matter what, you must do three things. The first is to have a 30-second rundown ready that covers who you are, where you came from, what you are doing at the new job and any other key information. Next, make a point to approach people when occasions naturally present themselves and introduce yourself. If you are on the shy side, role play a few days before you start. Last, but not least, ask the following three questions.

1. What is the status of my work group in relation to the company at large? (For example, who is the go-to person in the group for employees outside the immediate department?)

Ask your supervisor about the status of your work group when you two are alone. The aim is to learn about the interactions of the people you are working with. What relationships, such as alliances or ties, do you need to know about? Who do you go to if you need help? However, asking about that directly may come across as rude or too blunt, so asking about the status of the group often gets the answers you need while lowering the risk that you offend your supervisor or give the wrong impression.

2. Are there any unusual processes or routines?

This is a question to ask your coworkers. Perhaps your supervisor has an odd rule about doing a certain task a specific way or doesn’t like to be approached during certain times.

3. What are the “unofficial” hours?

Some jobs have official hours that almost no one follows, while the times are followed strictly at some businesses. Does everyone come in late? If you leave a couple of hours early to go to your child’s ball game or to get a sick child, can you work from home? Will the missed hours count against you?